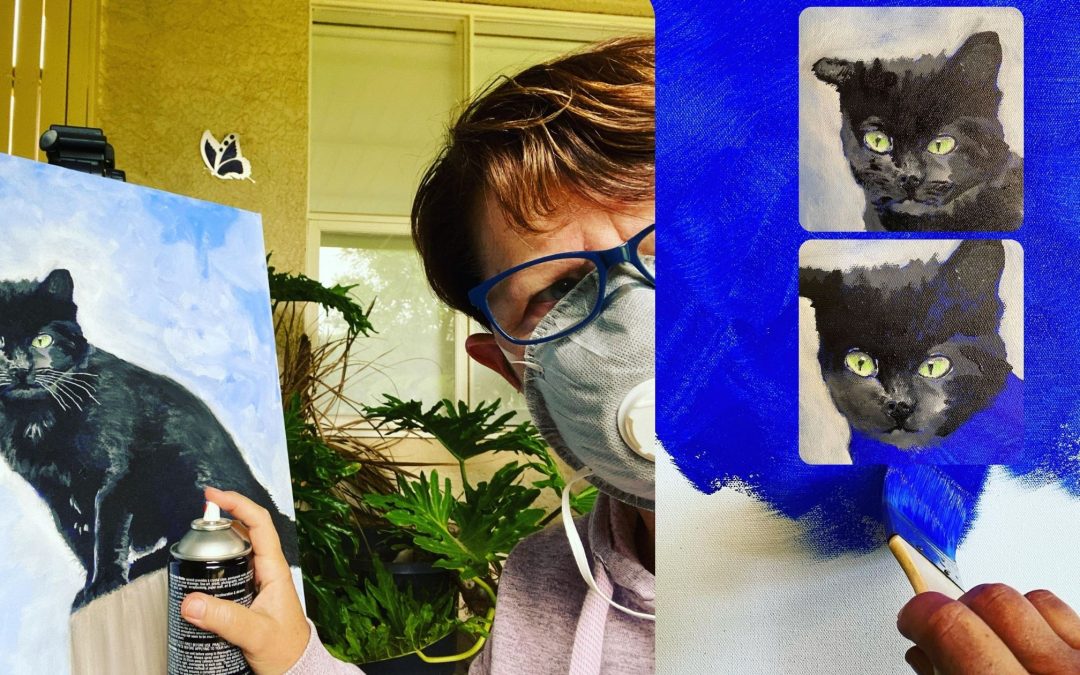 In early 2021 Kerry was delighted to be contacted via Instagram to paint the treasured cat of Margaret River winery owner, Debi.

Falling in love with Kalo the minute her photo was seen, confidence and creativity grew immediately as Kerry knew she could bring Kalo to life on canvas with her personality and the spirit in her eyes.

To start the commission

Once photos of Kalo were received via Messenger, one of the photos included Kalo in the perfect ‘hero’ position so she could be painted in the perfect pose sitting on a fence post. There was no need to ask for more photos to be taken and the painting could start quickly.

Looking full of personality in that position, consideration was then given to the layout of the artwork. Choosing to paint the background of the entire canvas ultramarine blue, added strength to Kalo’s black coat and the eventual final background.

After sharing a size/price guide the canvas was chosen and Debi encouraged Kerry to paint according to her inspiration, which was much appreciated.

Kalo is the hero of the artwork

To have Kalo large in the best view, it was decided to paint her with only a portion of her tail as this would have taken up too much space in the configuration.

Encouragement and engagement from Debi was great, where the client and artist enjoyed the process, checking in every now and again.

It was fabulous to receive a short video of Kalo sitting up at a desk checking out her painting on her laptop in Western Australia.

The artwork was posted via Australia Post and kudo’s to them it arrived at the PO Box in Western Australia within days and the whole process took around 4 weeks. Kalo’s family are now deciding where to hang her painting in their picturesque winery home.

Let Kerry create for you

Don’t be shy, contact Kerry about a commission you’ve always longed for…

Take a look at other commissions completed.